The editors at Best Degree Programs decided to research the topic of: A Geek’s College Party Guide

Sure, beer pong and pool parties are great, but Greeks have nothing on geeks. Here’s to building up your tolerance 3 ways only geeks can.

– SETTINGS:
– Power ups set to advanced
– Power downs set to off
– RULES:
– If you die, take a drink of beer
– If you kill yourself, take a shot of sake
– If you get killed by the dangerous bomb, Sake Bomb!
– AND if you get killed by a landmine, take a sake shot, loser
– LOSER PUNISHMENT:
– Last place at the end of a full game has to take a Sake Bomb!

– 1 bottle of sake
– Beer
– Japanese beer for Bomberman… because sake with Keystone is questionable, but Keystone + Mario Party = greatness
– Sake Bomber
– Glass half full of beer
– Drop shot glass of sake into beer
– For the Princesses:
– Fresh Peach Donkeys; call it “The Princess Peach”
– Attire *Optional* Dress as your favorite 8-bit character

SCOTT PILGRIM VS. THE WORLD PARTY

– Scott Pilgrim Blu-ray
– 65 inch or greater flat screen with touch pad remote, High Speed HDMI Cable, and surround sound
– What do you mean, “why?” Why NOT?

– Each drink is consumed after an ex is defeated.

– Spiced rum
– Top with Bacardi 151
– CAUTION: This shot is flammable and is extremely hard to extinguish. DO NOT IGNITE UNLESS YOU ARE 100% SURE of what you are doing.

– Shot of Jagermeister
– Cup of Red Bull
– When Lucas Lee gets on the rail, drop the shot glass into the Red Bull, and chug. If you don’t finish it by the time he’s KO’d, start over.

– Follow up with some all night Rock Band
– Any version for Xbox, PS3, or Wii
– Rock Band 2 “No Fail” is probably your best bet for fun after your college level beverages
– Attire Video game-themed T-shirts encouraged

Now go on and geek out your college glory days like a pro. And remember if at first you don’t succeed; call it version 1.0. 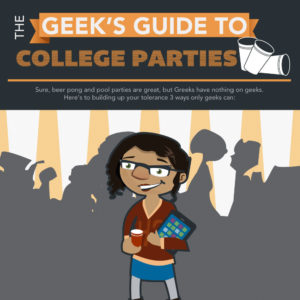