The startup world is not solely the realm of men. Firms owned by women currently account for almost 30% of all new businesses and have grown at 1.5 times the rate of other small enterprises over the last 15 years. Let’s take a look at 10 women behind tech, science or engineering startups. (1)

Notable for: Roominate, a line of toys allowing girls to design, build and electrify their own dollhouses.
How they got started: Alice asked her dad for a Barbie for Christmas and he gave her a mini saw, so she made her own dolls. Bettina grew up constructing elaborate Lego creations with her older brother. The two women met while studying engineering at Stanford. (2-5)

Number of backers on Kickstarter

Notable for: Selling DIY electronics, tools and kits for makers of all ages

How she got started: As a graduate student in electrical engineering at MIT, Limor would experiment in the student labs at night, creating products she’d eventually sell through Adafruit, such as the Minty MP3 player, which fits inside an Altoids tin. (6-7)

Notable for: E-commerce platform and online media hub connects DIY enthusiasts with tutorials and inspiration as well as the tools and supplies to complete them

How she got started: After she graduated from college, Brit worked at Apple, learned how to code, worked at Google and then left to form her own tech startup – after taking a six-month break. During those six months, Brit was inspired to create Brit & Co. (8-9)

Notable for: High-tech women’s underwear line aimed at preventing leaks through a “quad-dry, BreatheTECH” support matrix that cuts down on the need for disposable tampons and pantyliners. The company also partners with AFRIpads to give a week’s worth of washable, reusable pads to girls in Africa for each pair of Thinx sold.

How they got started: Twin sisters Miki and Radha were talking to their friend Antonia about mishaps and frustrations with underwear options during that time of the month, and they learned that girls in developing countries often have to miss school due to lack of access to pads. The three women decided to kill two birds with one stone by inventing Thinx. (5, 8, 10)

Funds pledged on Kickstarter for Thinx

Number of backers on Kickstarter

Notable for: Digital invitation and social planning service with 17 years of history.

How she got started: Selina and a friend, Al Lieb, came up with the concept of Evite while she was studying computer science as an undergraduate at Stanford. After graduating, she kept working on her project and eventually made it big when it was sold to Ticketmaster in 2001. Selina is now the chief technology officer of SurveyMonkey. (11-13)

Number of registered users at Evite

Notable for: Lumo Lift and Lumo Back, wearable gadgets that vibrate when its wearer slouches in order to improve posture. Both devices also track calories, steps and distance.

How she got started: A lifelong athlete with an interest in health, Monisha co-founded the company with Dr. Charles Wang and Andrew Chang. The three discovered how important posture is to reducing back pain when Andrew attended posture classes, and they decided to launch Lumo Back through a Kickstarter project. (5, 14-16)

Total amount raised for Lumo Back on Kickstarter

Total amount raised for Lumo Lift through another crowdfunding campaign

How she got started: With a colleague, Heather originally co-founded a secure document sharing site for families, but saw that educators were using it more and more as an alternative way to share classroom-based media with students and parents. She decided to go it alone and pivot the company, turning it into Pathbrite in 2012. (11, 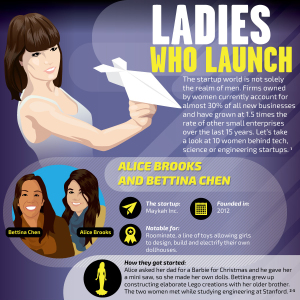