Ultimate Guide to Science and Engineering Degrees and Careers 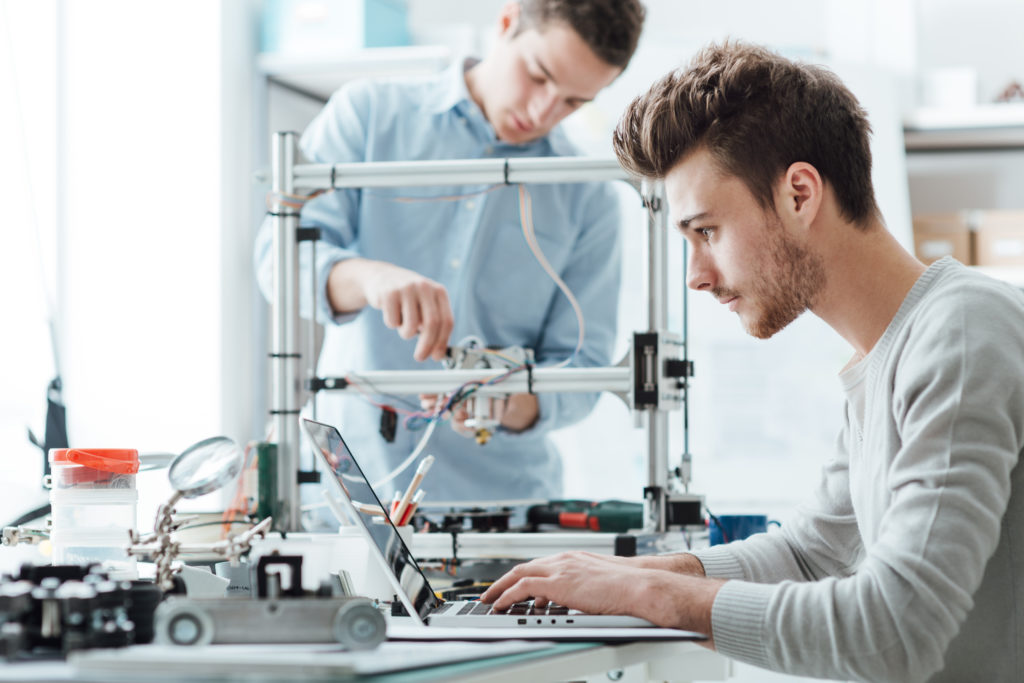 Admission Criteria and Requirements for Science and Engineering Degrees

While most science and engineering degree programs hold similar admission standards, requirements may vary by school and program type. Below are the most common admission requirements for three different degree levels.

For both science and engineering bachelor’s degrees, admission standards are similar. Admission requirements include a high school diploma or its equivalent, such as a G.E.D. or homeschool completion, a strong GPA, and certain prerequisite courses. Since most science and engineering programs are highly competitive, a strong GPA is necessary. Top-ranked programs require a minimum GPA of 3.3 or 3.5. However, some programs may ask for a 3.0 minimum GPA. Standardized test scores, such as the ACT or SAT, may also be required. Since today’s schools are not all requiring test scores for admission, other criteria may be evaluated. Letters of recommendation and work or volunteer experience may also weigh in heavily on an application.

As with undergraduate degree programs in science and engineering, master’s degree admission requirements vary by institution. Graduate school is highly competitive. Getting in takes competitive GPAs and test scores, as well as research and work experience. Typical admission requirements include an earned bachelor’s degree from an accredited college or university, competitive GPA scores of at least 3.3 for higher-ranked institutions, and letters of recommendation. Additional requirements vary by institution, but may include a statement of purpose and related work history or research experience.

Individuals applying to Ph.D. or doctoral science and engineering programs should prepare for the competitive nature of admission. As with other degree levels, admission requirements vary by school and program. However, some doctoral programs require similar criteria to be met for admission consideration. Common requirements include an earned master’s degree in an area of science or engineering from a regionally accredited institution and program, highly competitive undergraduate and graduate GPAs, and competitive GRE scores. Letters of recommendation, a state of purpose or goals, and research experience may also be required for admission.

Biology: Biology is a popular degree choice because it blends many science disciplines, from chemistry to ecology. You can do a lot with a biology degree, depending on what interests you plan to pursue. Biology majors have gone on to become dentists, doctors, or research scientists.

Chemistry: Grounded in lab work and research, a major in chemistry offers a rigorous interdisciplinary science education that can be utilized in various careers. Chemistry programs, especially at the undergraduate level, emphasize laboratory coursework in math and natural science. Branches of study may lead to chemical engineering jobs, roles as chemists, or professional positions like doctors and pharmacists.

Marine science: Marine science or marine biology is a rewarding degree for individuals interested in marine life and oceanography. While coursework is completed in the classroom or online, laboratories take place in the field. Trips to the ocean and waterways are customary. Research-based courses cover topics like geological sciences, marine biology, and oceanography.

Pharmacology: Pharmacology majors study the chemical makeup, interactions, and effects that drugs have on the human body. The major also focuses on how to use drugs to treat medical conditions. Courses cover topics like biological effects, chemical properties, drug action, and toxicology.

Physics: A general physics program for undergraduates focuses on the scientific study of matter and energy, while testing laws governing the energy-matter continuum. Classes focus on topics like electricity and magnetism, nuclear processes, quantitative methods, relativity and quantum theory, and wave properties.

With several career possibilities for engineers, pay varies by job title. The Bureau of Labor Statistics reports earnings for various engineering roles. We have detailed those earnings below.

A civil engineer works in various locations, designing, building, and managing infrastructure projects and systems. Most civil engineers hold graduate degrees and licensure, especially those who advance to senior positions. The median annual wage for civil engineers, as reported by BLS, is $88,570. The highest 10% of earners make more than $144,810 annually. As with engineering careers, pay varies for science jobs. The Bureau of Labor Statistics reports earnings for various science careers. Earnings potentials are detailed below.

The median pay for agricultural and food scientists, as reported by BLS, is $68,830, with the highest 10% earning over $125,000 per year. Those earning the highest wages generally work in research and development in engineering, life, and physical sciences.

According to BLS, biochemists and biophysicists earn a median annual wage of $94,270, with the highest 10% bringing in more than $169,000, on average. Wholesale trade and management consulting services are among the highest-paying industries for this occupation.

BLS reports that the median annual wage for astronomers is $119,730, and $129,850 for physicists. Top-paying industries for astronomers include the federal government and research and development in physical, engineering, and life sciences. For physicists, the top-paying industry is ambulatory healthcare services, where this occupation sees a median annual wage of $183,420.

A steady job outlook and solid earnings potential draw individuals with bachelor’s degrees to careers as zoologists and wildlife biologists. According to BLS, individuals in this occupation earn over $66,000 per year, on average. The employment of aerospace engineers is projected to grow three percent through 2029, as fast as the anticipated growth for all architecture and engineering occupations. BLS reports that employment should be especially favorable for individuals trained in software, such as C++ and Python, or for those with specialized training and education in structural engineering.

A favorable job outlook is expected for bioengineers and biomedical engineers through 2029. In fact, BLS reports employment for these occupations is projected to grow five percent over the next several years. The growth is faster than the average for all engineering occupations. As a result of the baby-boom generation living longer and keeping active, the demand for biomedical devices and technologies is expected to increase. Individuals with specialized training and education should see the best job prospects.

The anticipated employment growth for chemical engineers over the next eight years is four percent. This job outlook is about as fast as the average for all occupations combined. Demand for chemical engineers largely depends on the demand for products of manufacturing industries. However, overall growth may be slowed due to declines in employment in some sectors of manufacturing. BLS reports that individuals with a strong biology background will have the best chances for employment.

Employment of environmental engineers is expected to grow three percent through 2029, according to BLS. The growth rate is about as fast as the average for all occupations. BLS reports that the most favorable job prospects are for candidates who hold a master’s degree in environmental engineering. As current engineers retire, their positions will need to be filled, especially in government industries.

BLS projects that employment of health and safety engineers should grow four percent over the next decade, about as fast as the average growth for all occupations. Growth is expected as buildings, processes, and products become more complex and regulations are imposed. Health and safety engineers will be needed to produce safe and effective consumer products, cut costs, and save lives. Individuals with specialized training should see the best job prospects.

BLS reports a favorable job outlook and four-percent employment growth for mechanical engineers over the next several years. Employment growth for this occupation should be stable through 2029. Prospects will be especially good for individuals with training in the latest software tools, such as computational design and simulation. Also, mechanical engineers with training in 3D printing will see some of the best job prospects. According to BLS, employment in life, physical, and social science occupations is projected to grow five percent though 2029, faster than the average for all occupations. Approximately 68,200 new jobs will be added during this time frame, according to BLS projections. An increasing demand for scientific expertise means that more jobs will be added, particularly in areas like biomedical research, environmental protection, and more. Below are several science occupations and the projected job outlook for them, as reported by BLS.

Agricultural and food scientists should expect an overall employment growth of six percent through 2029, according to BLS. Growth is anticipated as research into agricultural production methods, processes, and techniques continues to rise.

According to BLS, biochemists and biophysicists can expect a four-percent overall employment growth over the next eight years. A favorable employment growth is anticipated as time and money are spent developing biological products and processes geared to improve the lives of people. Also, an aging population will drive demand for new drugs to cure and prevent disease. As a result of this push for innovation, more biochemists will be needed.

The job outlook for geoscientists over the next decade looks favorable. In fact, BLS reports a five-percent growth in employment for this occupation. As demand for environmental protection, energy, and resource management increases, more geoscientists will be needed.

Favorable employment growth is expected for medical scientists. BLS anticipates a six-percent growth in employment for this occupation as the demand for human health improvements continues. However, since the federal government is a major source of funding for medical research, the level of funding will impact competition for acquiring research grants.

While marginally slower than the employment growth for other science careers on our list, microbiologists should still see an average growth of three percent through 2029. BLS reports that demand for basic research contribution, problem solving in industrial production processes, and public health and safety will drive employment growth for this occupation.

The overall employment of physicists and astronomers, according to BLS, is projected to grow seven percent through 2029. Growth is faster than the average for all occupations, even those in science and engineering. Projected growth will create about 1,400 openings for this occupation each year, on average, for the next eight years.

A four-percent employment growth is expected for zoologists and wildlife biologists through 2029, according to BLS projections. However, a limited number of jobs may be impacted by governmental funding and budget constraints. Job candidates with practical experience through internships, summer jobs, and volunteer work should see the best prospects for employment.

Certain important qualities, characteristics, and skills ensure that individuals working in science and engineering careers succeed. In addition to specialized training and education, soft skills, or skills not taught in the classroom, should be part of who the individual is in order to succeed on the job. Below are several important qualities for engineers, scientists, and those working in related jobs.

Analytical skills: Scientists perform experiments and analyze data with accuracy and precision, while engineers design and troubleshoot their work using mathematical skills and technology. Both roles require analytical skills that will help lead to a successful outcome.

Perseverance: Being thorough in research and approaching problems with diligence helps mitigate feelings of failure when, through trial and error, the wrong outcomes are received. As an engineer or scientist, it is easy to feel discouraged when a project takes a turn, but persevering helps one push through and not give up.

Strong math acumen: Careers in science and engineering require math skills, such as calculus and statistics. Scientists like biochemists work with complex equations and formulas as they conduct experiments. One must have a broad understanding of math in order to work in these occupations.

Time-management skills: Having the ability to meet deadlines when conducting research or completing a project is critical in the role of a scientist or engineer. In order to prioritize tasks while maintaining a certain quality of work, one must be able to manage their time.

Writing skills: Since scientists and engineers must communicate with others, such as colleagues, clients, and administration, they must be able to deliver technical information to those with little to no scientific background. These occupations require the ability to write clear and concise reports or publish research based on findings.

This concludes our article providing information about science and engineering degrees and careers.