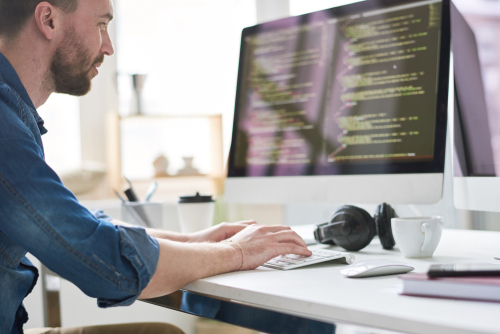 With so much enthusiastic hope directed towards the skill of software development, one might be tempted to wonder if there is a future career hiding among all those semicolons. The truth is becoming a software systems engineer is not as difficult as some people might think, provided they learn the proper relationship between programming and software engineering.

Building a system and making it work usually involves a wide variety of skills, some of which are useful in the field of programming. A good example of the difference is the tiered development model. Here, database software, business logic, and a user interface must all interoperate. They must do this to provide users with the intended functionality. Is there a career in this kind of work?

One of the key skills an engineer must possess is the ability to recognize something called “atomized functionality.” A gear, for example, is a mechanism that does one thing well. It transfers kinetic energy from one place to the next. It is atomized because it can’t be reduced to a simpler form.

In software, a function that calculates interest on an investment might have the same kind of purpose. It does one thing well. An engineer can integrate that function into many different applications. This means the interest calculation function saves future projects from having to re-invent the wheel. It also means maintaining the function across many applications requires changes to only one source file.

Component design and integration are keys to being a good software systems engineer. Recognizing how and where these components should be integrated is a valuable skill. Many employers and companies are willing to pay generously to acquire your skills.

When component integration reaches the application level, it can be expressed in terms of “tiers.” Each major category of functionality like data storage or business logic can be assembled into a “tier” in a distributed application. Some developers refer to this as a “stack.” At the foundation is the database. In the middle is the business logic. At the top is the user interface. Each tier is expected to do its job well. Most importantly, each tier is expected to do its job independently of the others. This makes it possible to make changes to one without breaking compatibility with the other two.

Software that runs fast and runs well is a rare thing. At the same time, such software can save companies tremendous expenditures in:

A good engineer can rapidly identify flaws in a system. He or she can employ standardized techniques to rectify them without breaking compatibility. Often this is done without dramatically higher costs. Since these kinds of optimizations pay for themselves, they can often lead to very high salaries.

Ultimately, software engineering is valuable, provided both management and the engineer recognize what they are trying to accomplish and why. Development is an exacting business that doesn’t respond well to abrupt changes in objectives. At the same time, engineering can help combine development and goal-setting into a profitable outcome.