What Would You Have Been Before Modern Education?

Humans have always learned instinctively, but formal education has never been so fully available. Lets take a look at the education people received in the past.

Public Pre-k through Doctoral programs:
Or, close to 20 years of public education…is unprecedented in human history.

Then–> University
Or
Apprenticeship

The idea that you can “be whatever you want” is unprecedented.

Education throughout the history of the west:

Ancient Rome:[11]
Only 1-2% of freed ancient Romans were literate, yet even the poor sent many males to school until around 6.[12]

The rich:
“Group-tutors” outside of the home.
Or,
Gifted, educated slave (usually Greek) tutors

The Ludus
Starting at age 6:
Wealthy boys and girls+
A personal slave (called a paedogogus) in charge of their behavior and appearance.

Medieval Europe
9/10 Medieval Europeans were serfs.
Who rented land from their lord.
A typical week:
Work 3 days for Lord
1/2 day for their Parish (priests)
3 and 1/2 days for themselves

Permission from your lord required for peasants who wanted education.

Are you male:
No: Some medieval girls were educated in keeping an estate, an instrument, and singing.
Yes:–>
Is your father a craftsman?
Yes: You are automatically admitted into the guild of your father.
No: You may apprentice.
–> In crafts such as:[5]
Masons
Carpenters
Painters
Cloth Makers
Tanners
Bakers
Cobblers
Apothecaries
Candle Makers
–>Some females apprenticed to be the wives of male craftsmen,

By late medieval years trade increased the need to have literate merchants.

Grammar schools, funded by wealthy merchants, taught Latin.
School lasted from dawn until dusk.
Classes were longer in the summer, shorter in the winter.

Leading to a Doctorate

Students:
1.) Were often subject to no laws but those of the Church.
2.) Producing many abuses without recourse.

With all of your schooling options today, it’s crazy to think of the long odds of getting a degree in the past. 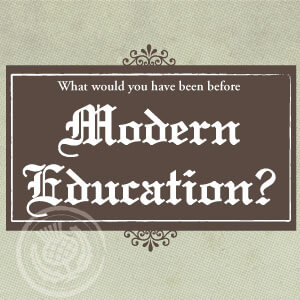