What Is the Best Degree Path for Becoming a Geophysicist? Deciding what to study in college is a tough choice. Even if you know that your field of interest lies in science, what program of study is right for you? If you make the decision to major in physical and biological sciences and pursue a career as a geophysicist, you’re preparing for an exciting and profitable occupation. Geophysicist is a top-paying job among physical and biological science majors, with experienced professionals earning a median salary of $93,580 per year. But the first step to achieving your goal of becoming a geophysicist is earning a degree.

How Do You Become a Geophysicist?

Even for entry-level positions in the field of geoscience, you’ll need a bachelor’s degree (a geophysicist college degree) from an accredited college or university. Some research positions require candidates to hold master’s degrees or even Ph.D.’s. Doctoral degrees are especially important if you plan to teach at a four-year institution.

Geophysicists apply physics concepts and techniques to study the gravitational, magnetic, and electric fields of the earth. This furthers scientists’ knowledge of both the planet’s interior core and its surface. Geophysicists must be able to:

What Degree Does a Geophysicist Need?

To accomplish all this, students need a specialized education for geophysicist careers. A geophysicist degree in geosciences is appealing to employers. As stated above, you’ll need a bachelor’s degree in geoscience or a related discipline, such as a physical science or a natural science, to land an entry-level job. But students can also prepare by majoring in subjects like:

The above geophysicist majors offer a more generalized approach to a single scientific discipline, but most programs require students to take one or more geology course.

For students who choose a major besides geoscience, it’s important to take plenty of geology courses that will lay the foundation for your potential career. You’ll need to gain practical experience in the field by taking laboratory-based science courses that include geology fieldwork.

Another way to gain knowledge in geology while majoring in another science discipline is to pick up a minor or concentration in geology or geophysics. By earning a minor, you’ll take several courses designed to lay a strong foundation in geology. You’ll also gain valuable laboratory experience that will assist in your career.

Other possible geophysicist majors that aren’t geophysics or geoscience include:

By earning any geophysicist degree, and by taking the necessary geology courses, you should qualify for an entry-level position as a geoscientist or geophysicist. Just keep in mind that employers do require a degree to become a geophysicist. 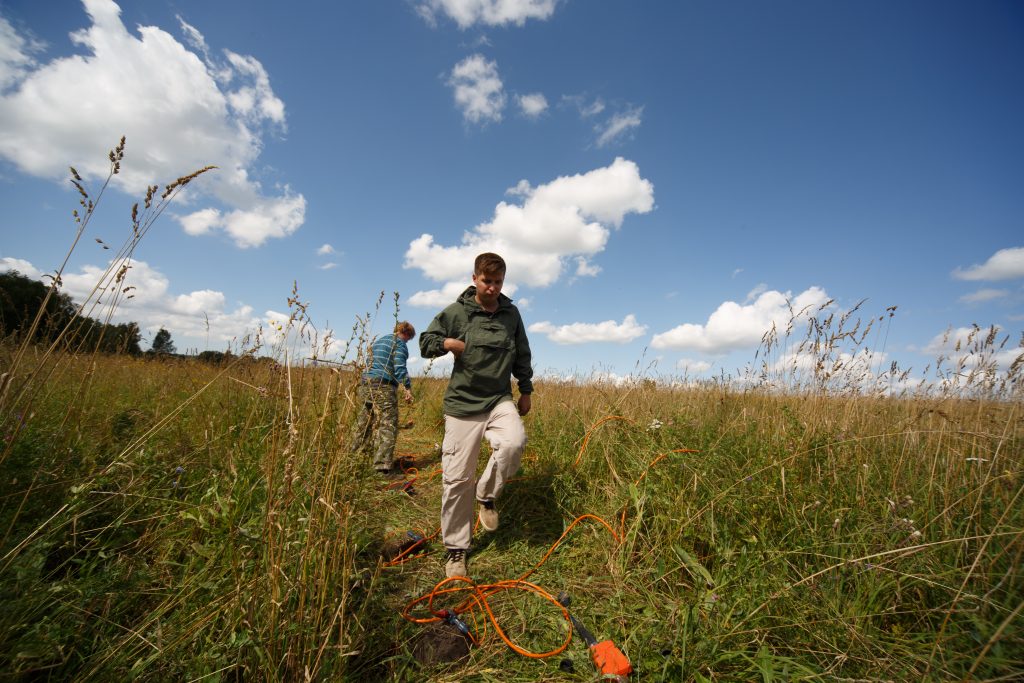 What Aspiring Geophysicists Need to Learn

They must also learn the computer skills necessary to:

Students should also take advantage of all opportunities to gain real-world experience. Aspiring geophysicists should expect to spend time learning:

Obviously, skills taught in the classroom are very important for aspiring geophysicists. However, other skills are important, too, and they may not be the same skills you work to develop in a geosciences classroom. For example, geoscientists spend a lot of their time outside when working in the field, so they must possess “outdoor skills” like camping and operating boats, aircraft, and other vehicles. Because they spend so much time in remote locations, it’s essential that geophysicists also have the physical stamina to carry necessary equipment on their hikes to locations of study.

If you have these abilities and want to learn more about the concepts of physics and the study of the earth, there’s a good chance you’ll be happy working as a geophysicist. The job offers:

Further information on earnings potential and job outlook is detailed below.

How Long Does It Take to Become a Geophysicist?

How to Become a Geophysicist Without a Degree Licensing and Certification Requirements for Becoming a Geophysicist

Most employers will expect or require a practicing geologist to be licensed for positions beyond those at the entry level. Since a geophysicist works under the umbrella of geology, advanced positions will require licensing in most cases. Currently, 31 states require licensing for geologists, although licensing is not always required, especially for entry-level work. The states that do issue licenses use the Fundamentals of Geology Exam (FGE), which is administered through the National Association of State Boards of Geology (ASBOG).

How Much Money Does a Geophysicist Make?

Now that you know which degree for geophysicist jobs you need, you’ll need to land a job, and it’s important to learn how much money you can make in this career. The Bureau of Labor Statistics (BLS) provides information on median annual wages for various occupations, including geoscientists. According to BLS, the median annual wage for geoscientists is $93,580. The lowest 10% of earners make less than $52,000, while the highest 10% earn more than $201,000 annually.

Wages fluctuate by industry type and geographic location. According to BLS, certain industries offer higher wages for geoscientists, and in some cases, they offer higher-than-average earnings. High-paying industries include:

Two of the above industries, mining and quarrying and the federal government, offer much higher wages than the national average for geoscientists. In fact, mining, quarrying, and oil and gas extraction offers over $32,000 more annually than the average annual wage for this occupation. The federal government, too, offers over $10,000 more in earnings than the national average for geoscientists.

In addition to industry type, geographic location can greatly impact earnings for this occupation. In some states, cities, and non-metropolitan areas, geoscientists and geophysicists earn much higher wages than they do in other locations. The top-paying states and their annual mean wages, according to the BLS, include:

These five top-paying states offer much higher wages than the average for this occupation. In fact, wages for geoscientists in Texas are over $73,000 higher than the national average.

Certain metropolitan areas also offer high wages. It should come as no surprise that most of these high-paying areas are in Texas and Oklahoma, but some are found in California, Louisiana, and Colorado. The top 10 highest-paying metro areas for geoscientists are:

Living in a non-metropolitan area can offer a lower cost of living than living in a metro area. Smaller areas are less populated, but in the case of the above regions allow room for financial growth for geoscientists. Home prices, cost of rent, groceries, and consumer goods and services are generally lower than they are in major metro areas. This means that wages for geophysicists stretch further in non-metro areas than they do in larger metro cities.

What Is the Job Outlook for Geophysicists?

You now know how to become a geophysicist, but next, you need to understand the job outlook for your potential career. It’s important to know what to expect as you embark on a career in geophysics.

According to the Bureau of Labor Statistics (BLS), the employment of geophysicists is projected at seven percent through 2030, which is about as fast as the total employment growth of eight percent for all occupations. The BLS also reports that approximately 3,100 job openings for geophysicists are expected each year for the next decade. These openings are primarily the result of the need to replace workers who retire or transfer to different occupations. However, other factors will also impact the job outlook.

There is a growing need for responsible land and resource management. Environmental protection and a need for energy will result in demand for geoscientists. Geophysicists and geoscientists will be involved in discovering and developing sites for alternative energy sources, as well as for traditional sources, over upcoming years. The increased use of alternative energy and the growing demand for these sources will result in more jobs for geophysicists. Other Roles for Geophysicists

Geophysicists are educated scientists who can lend their knowledge, experience, and skills to other occupations. Below are several examples of geoscientists and the work they do.

Geochemist: For those interested in the combination of geology and chemistry, geochemistry is an ideal field. Geochemists apply organic and physical chemistry to study the composition of elements found in ground water. They study aquifers and wells. They also look at the earth’s materials, like rocks and sediments.

Geologist: A geologist studies the history of the Earth, as well as materials and processes that exist on it. They investigate the formation of rocks and determine what happened to them during the formation process. Due to a similar education path, geophysicists can work as geologists in different subgroups as mineralogists and stratigraphers.

Seismologist: Seismologists study earthquakes and phenomena associated with these natural events, such as tsunamis. They use specialized equipment and instruments to determine seismic activity.

This concludes our article on what is the best degree path for becoming a geophysicist.