What Is the Best Degree Path for Becoming a Research Scientist? 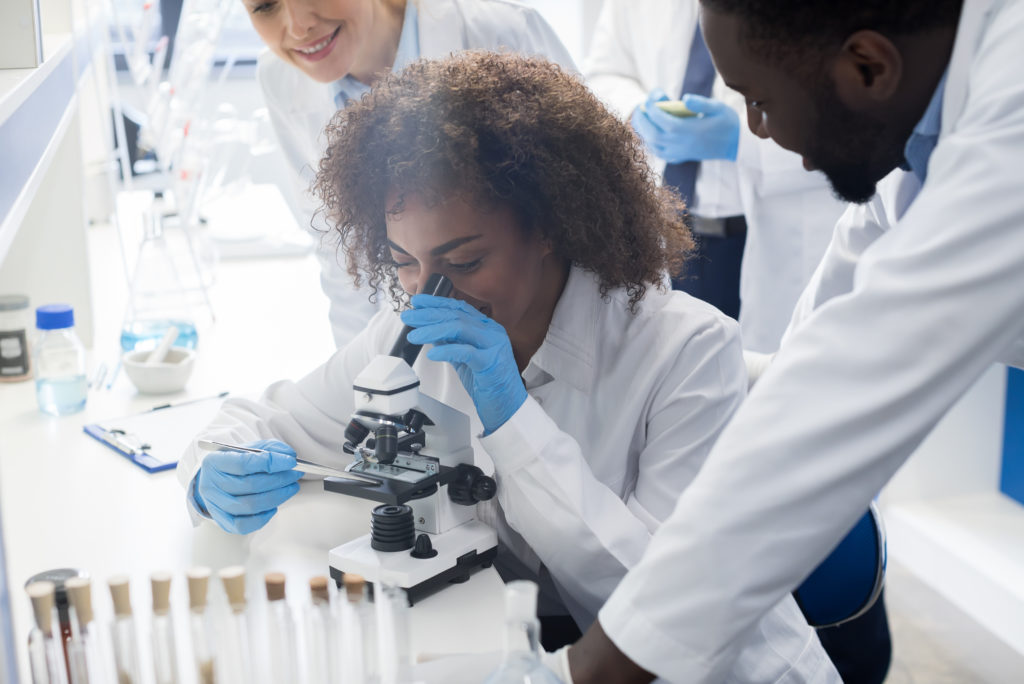 To effectively plan for the future, it’s not enough to simply decide on a college major. Students should also have an idea what they plan to do with their major and how they will launch onto their desired career path.

For example, if you’re interested in chemistry you may choose to become a research scientist. It’s among the top-paying careers for physical and biological science majors. Experienced professionals earn a median annual salary of $79,300. You might be a strong candidate for a career as a research scientist if you have a naturally curious mind and you enjoy solving problems. However, your critical thinking abilities and your thirst for knowledge aren’t enough to prepare you for this occupation. To become a research scientist, you must first pursue a rigorous college education.

All research scientist positions, even at the entry level, require you to hold at least a bachelor’s degree in a relevant subject. Chemistry is among the most popular undergraduate college majors among aspiring research scientists, especially those interested in chemical research studies. Suitable alternatives to majoring in chemistry are:

You’ll also take classes in  mathematics and computer science, according to the United States Bureau of Labor Statistics (BLS). Hands-on research work is an integral part of preparing for a career as a research scientist, so you should expect to learn as much important information in laboratory projects as you do in classroom lectures. Taking advantage of internship opportunities can help you develop both your skills and your résumé.

The Value of a Master’s or Doctoral Degree

Earning your bachelor’s degree is a milestone to celebrate, but for aspiring research scientists, it’s only the first step toward completing their formal education. Some entry level jobs may exist for candidates with only a bachelor’s degree. But most research scientist positions — and all high-level, management positions — will require an advanced degree. Master’s degrees may be sufficient for many positions with private companies or government agencies. But both positions at universities and any research leadership positions are likely to require you to hold a Ph.D.

The high rate of pay, as listed below, isn’t the only advantage to working as a research scientist. In this career, you will have the opportunity to make discoveries and breakthroughs in important disciplines like:

The experiments you help develop and the information you glean from them may help benefit society and our understanding of the natural world. Your findings can lead to new innovations to help people live longer, better lives. This career requires you to make a significant investment of your time, money, and effort in attaining an advanced education. The potential for satisfying scientific curiosity and making a difference means that the preparation is worthwhile. Earnings Potential for a Research Scientist

According to the BLS, the median annual wage for research scientists, including materials scientists, is $99,460. However, industry and geographic location impacts earnings potential. BLS reports that the highest 10% of earners in this occupation make much more than the average, at $165,290 annually.

In addition to pay variations among industry type, geographic location can impact earnings potential. BLS reports five top-paying states for research and materials scientists. The highest-paying state for this occupation is New Hampshire. The annual mean wage for research scientists is $156,630, which is a much higher wage than the average for all individuals working in this occupation.

A favorable job outlook for occupations, according to the BLS, is an outlook that matches or exceeds the average for all occupations. The average job outlook is four percent. This means that a four percent change in employment is projected over a certain number of years. For research scientists, a five percent overall employment change is projected through 2029. According to BLS, research scientists should anticipate a five percent growth in employment, which is one percent faster than the average growth for all occupations. 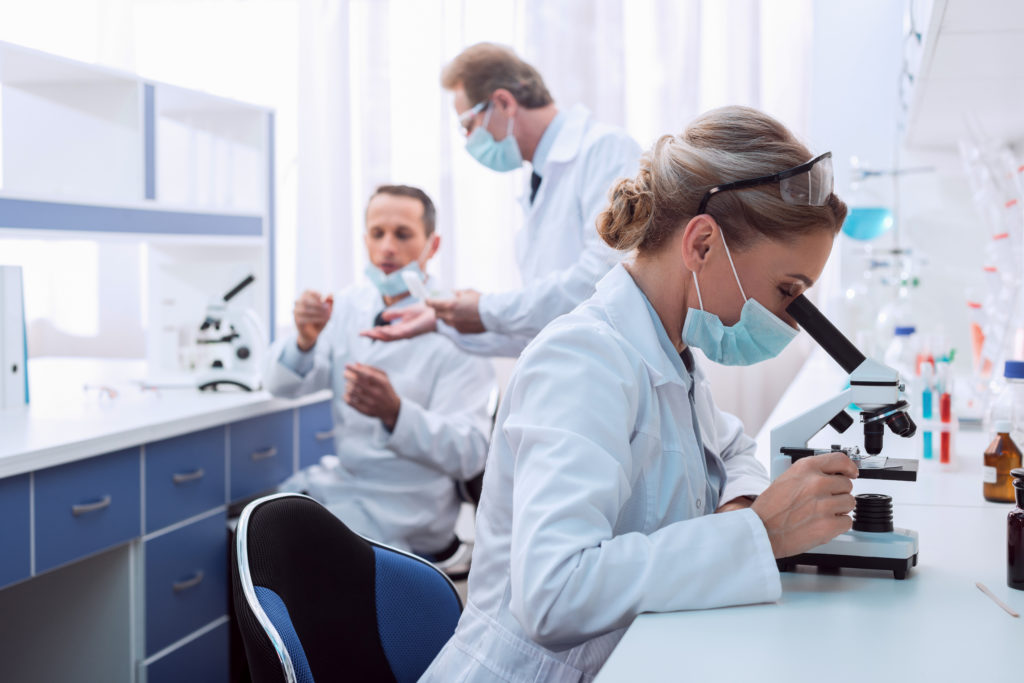 Particular areas with projected growth in this occupation include pharmaceutical and medicine manufacturing. Chemists and research scientists will be needed to help develop nanotechnology for medicinal uses, according to BLS.

In addition to the demand for more research scientists to develop and produce, there will also be the need to replace scientists who exit the labor force. Research scientists who transfer to other occupations, retire, or leave the labor force will need to be replaced. Recent college graduates with adequate laboratory experience outside of a classroom environment, such as internships or cooperative programs, should see better job prospects than those without experience.

Also, those with advanced degrees, such as a Ph.D., along with work experience, are expected to have the most favorable job prospects. Since competition can be fierce for the limited number of available job opportunities, education and experience are critical when seeking employment as a research scientist.

Advancement for research scientists usually follows experience. The more experienced a research scientist is, the more qualified they are for advanced research opportunities. Greater responsibility may also be gained through further education. For example, a researcher with a master’s degree may earn their Ph.D., which will better qualify them for advancement. Even Ph.D. holders have room to advance as they gain more experience in the laboratory. And as researchers become more proficient in managing and overseeing projects and teams, they may qualify to take on larger, more complex, and more expensive research projects.

In addition to the proper education and laboratory and research experience, there are important qualities every research scientist should possess. Some of these skills may be acquired in the classroom or in the workplace, but some are considered soft skills. Soft skills are personality traits that characterize a person’s relationship to their work and social environment. Below are several important qualities or characteristics that a research scientist should have for long-term success in their career.

Ability to persevere: Since scientific research involves a lot of trial and error, being able to persevere is important on the job. Without perseverance, research scientists may become discouraged with their work and findings.

Analytical skills: One of the most important skills for research scientists involves accuracy and precision. In order to carry out scientific experiments and research studies, research scientists must be precise. They must analyze data and findings, searching for errors that could potentially invalidate their research. 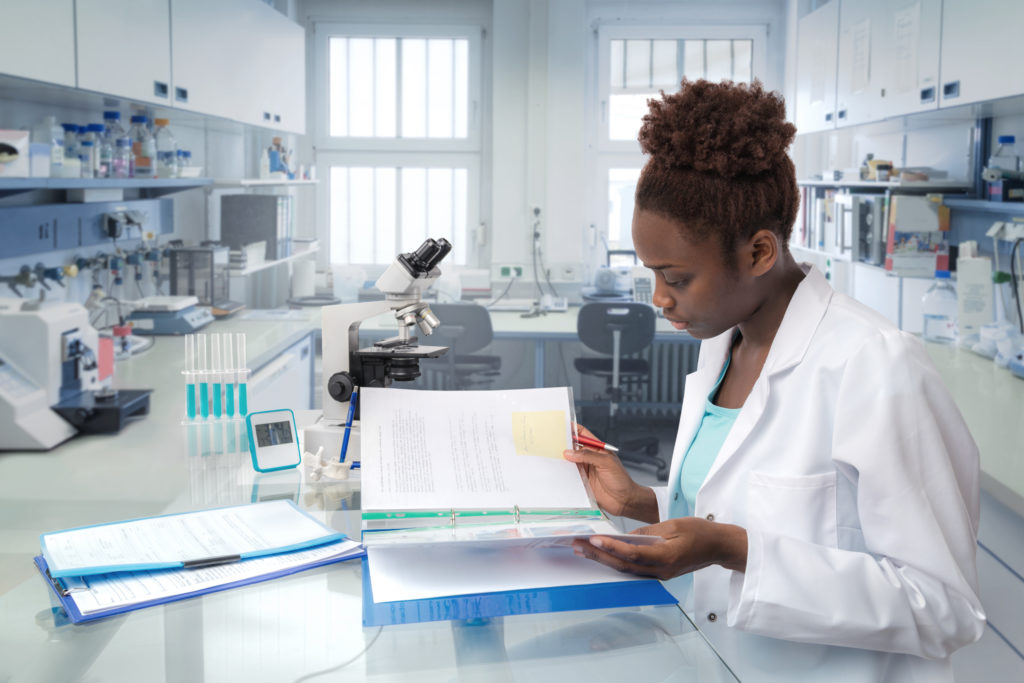 Work Environment of a Research Scientist

While most spend their days in labs, some time may be spent traveling, especially if the company has multiple research facilities. Depending on the research conducted, some research scientists may spend time outdoors, collecting samples and conducting onsite analysis of the environment.

Research scientists typically work full time and maintain regular office hours. However, there are times when additional hours must be worked to meet and keep deadlines. Time-sensitive laboratory experiments require additional hours spent on the job. During these critical data-collecting times, it is not unusual for a research scientist to work weekends or overtime.

Research scientists may be exposed to certain health and safety hazards when conducting research. They may handle certain chemicals that pose risks. However, following procedures and adhering to safety protocol helps minimize risks. To avoid problems, research scientists must follow proper procedures. This means wearing protective clothing like safety goggles, gloves, and gowns when handling hazardous materials. In the event of a safety issue, research scientists must properly document any procedure that was not followed properly in order to improve standards and regulations. Accidents must always be correctly documented on paper.

This concludes our article on the best degree path for becoming a research scientist.