Computer science bachelor’s degree programs look for applicants with strong academic performance. To stand out against competition, candidates should have strong GPAs. They should have equally strong standardized test scores, should the program require them. Additionally, applicants should have completed prerequisites during their high school years. Prerequisite courses include English, foreign language, mathematics, natural sciences, and social sciences. Also, completing several years of computer science, coding, and/or programming courses help prepare students for the rigor of the major.

Top-ranked computer science programs at the nation’s leading universities look favorably on prospective students with prior college coursework and AP courses. Students who have taken courses from a local community college or completed an online computer science course showcase their academic performance and willingness to learn. Relevant professional work experience also helps your application stand out from the pool of competitors vying for acceptance. Work experience may be gained from an internship or from volunteer work.

Top graduate-level computer science programs look for ambitious, academically superior students. Applicants must offer a strong GPA of at least 3.0; however, top-ranked programs may require a minimum GPA of 3.5 on all undergraduate courses. In addition to the GPA, applicants must have three letters of recommendation from individuals who may attest to the applicant’s academic performance. Usually the letters of recommendation come from college professors, academic advisors, or employers.

In addition to the above requirements, master’s degree computer science programs ask for a written personal statement or statement of purpose. Supplemental essays may also be required. All applicants should hold a bachelor’s degree in computer science, or closely related discipline, from an accredited college or university.

To enter a Ph.D. program in computer science, candidates must possess a bachelor’s degree in computer science, though a master’s degree may also be preferred. Doctorate applicants showcase their academic performance by submitting official transcripts from the colleges they attended. Also, GRE scores and letters of recommendation must be presented with the application.

A doctorate in computer science is designed to build on the knowledge and education of an undergraduate or master’s level program. The doctoral degree takes four to five years to complete and focuses attention on research in a particular area of the field. Coursework and research are required, and a dissertation and defense culminate completion of the degree. Concentrations or specializations provide students with a more in-depth study of a particular area of interest. Concentrations allow students to tailor their degree toward career goals or interests. Some of the newest and most in-demand concentrations include the following:

The evolving field of artificial intelligence requires broad and vast training. Earning a concentration in this field means taking courses that involve cognitive psychology, engineering, principles of computer science, and technology. In AI-specific topics, you should plan to take courses like decision-making and robotics, human-AI interaction, machine learning, and perception and language. During high school years, plan on taking advanced and honors courses in all sciences, including chemistry and physics, as well as discrete mathematics, if offered.

Game design or development concentrations allow students to develop an understanding of the principles–both technological and scientific–associated with the design of games for entertainment and serious applications. Games may be developed for consoles or computers. Courses generally cover topics like computer models of interactive narrative, game design and development, human-computer interaction, and introduction to graphics. Some programs offer unique electives in game design, such as fantasy, game studies, science fiction, and special topics in film.

The UX design (UXD) concentration, also known as user experience design, prepares students with the essential skills necessary to design and create accessible, engaging, and usable interfaces for websites and mobile apps. The concentration offers an in-depth understanding of the design and development process through a hands-on learning environment. Students focus on traditional design, as well as contemporary advances in the technology-based user experience. Courses encountered in a UX design concentration include communication in virtual worlds, designing technology for social impact, human computer interaction, and social behavior and technology.

According to the BLS, the median annual wage for computer and information research scientists is approximately $126,800. The highest ten percent of earners in this occupation make over $194,000 annually. The occupation offers one of the highest earnings potentials for all computer science careers. Also, job prospects are highly favorable, adding to the potential benefits of pursuing a career in computer and information research. Top-paying industries for this occupation include software publishers; research and development in the physical, engineering, and life sciences; computer systems design; federal government; and colleges, universities, and professional schools. 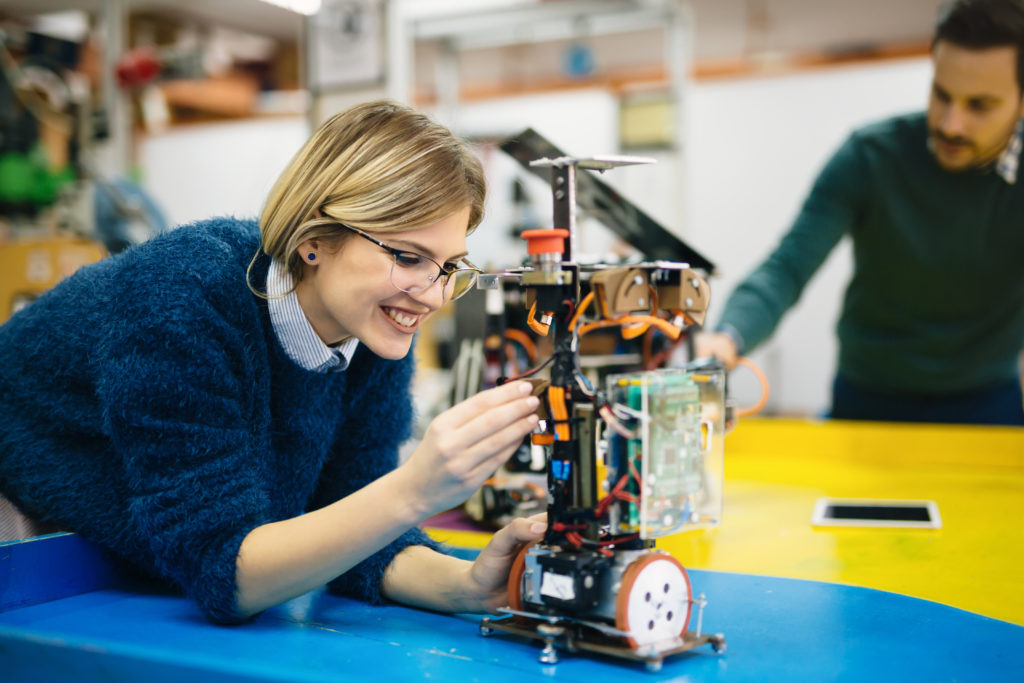 The BLS reports the median annual wage for computer network architects is $116,780, with the highest ten percent of earners in this occupation making $175,570. Job prospects remain stable, but certain industries report the highest earnings potential for this occupation. These industries include insurance carriers and related services; computer systems design and related services; management of companies and enterprises; telecommunications; and educational services – state, local, and private. The highest-paying industry for computer network architects is insurance carriers, which reports a median annual wage of $121,730 for this occupation. The second highest paying industry is computer systems design, which reports a median annual wage of $120,130.

Web developers and digital designers earn a median annual wage of $77,200, as reported by the BLS. The lowest ten percent of earners in this occupation make $40,750, while the highest ten percent make more than $146,430. There is one industry that pays a significant higher wage than the median annual earnings for all individuals in this occupation. According to the BLS, publishing industries, except the Internet, report a median annual wage for web developers and digital designers of $123,870. Other top paying industries for this occupation include computer systems design and related services; advertising, public relations, and related services; and management, scientific, and technical consulting services.

As with earnings potential, job outlook varies by occupation, as well as geographic location. According to the Bureau of Labor Statistics, employment in computer and information technology occupations is expected to grow 11 percent through 2029. The growth rate is much faster than the average for all other occupations. In fact, the projections anticipate about 531,200 new jobs added to the industry. So, why does the industry anticipate significant growth? In part, demand for computer science professionals stems from growth in the industry in areas like cloud computing, collection and storage of big data, and information security.

Employment of computer and information research scientists is expected to grow 15% over the next eight years, according to the BLS. This rate is faster than the average for all computer and information technology occupations. Job prospects should be excellent for qualified individuals, as rapid growth in data collection by businesses continues to drive the need to hire new people. With a growing emphasis on cybersecurity, and the push to find new ways to protect infrastructure and prevent cyber attacks, new jobs will be created.

Database administrators should see a 10% growth in employment over the next several years thanks to demand driven by increased data needs of businesses and companies. The faster-than-average job growth will make job prospects favorable for both recent college graduates and those with a few years of experience under their belts. Database administrators will be in high demand, but companies will require education and experience for new hires. Individuals with experience in the latest technology should see the best job prospects.

One of the best job outlooks for all occupations in computer science is that of the information security analyst. According to the BLS, employment of this occupation is projected to grow 31% through 2029. Significant growth is expected as analysts are needed to come up with innovative solutions that will prevent hackers from stealing critical information. Projected employment growth for information security analysts means 40,900 new jobs will be added to the industry. Individuals with related work experience should see the best job prospects. Also, applicants with experience working as database administrators, or individuals who have earned a concentration or certification in database administration, should see even better job prospects.

Software developers, quality assurance analysts, and testers show a favorable job outlook that is almost as impressive as the information security analyst. According to BLS, this occupation anticipates a growth of 22% over the next eight years, which is much faster than the average for all occupations, and twice the average for computer science and IT occupations. Workers in this field will be needed to respond to the increased demand for the evolving computer software industry.

While occupation impacts job outlook, so does geographic location. According to BLS, where you work changes the job outlook. Urban areas tend to have more favorable job outlooks than non-metro areas, and certain states see a higher growth than others. However, computer science jobs should see favorable growth over the next decade.

Since technology constantly evolves, and the technological tools used today may be obsolete in five years, industries hiring computer science professionals look for team-oriented, highly motivated, and organized individuals. Jobs in the tech industry aren’t for loners, as stereotypes have suggested. Contemporary tech roles call for individuals who work well in a team environment. After all, it takes a team to bring forth new innovations. Below are several soft skills, or qualities, necessary for careers in computer science.

Ability to concentrate: Detailed computer work requires the ability to focus attention for lengthy periods of time. Computer programmers focus their attention on their coding work, checking for errors in code. One must be able to sit for long periods of time while maintaining a high level of focus.

Communication skills: Computer science occupations, such as web developers and digital designers, need to be able to communicate effectively with colleagues, team members, and clients to coordinate work and expectations on projects.

Creativity: Computer science jobs require creativity, whether creating the appearance of a website or making sure an application is user-friendly. Even computer programmers must be creative when problem solving or trouble shooting. Creativity is especially important for computer science jobs like those held by web developers.

Customer-service oriented: Being patient and sympathetic are important qualities to have as a computer specialist. Customer-service skills are extremely important for professionals working directly with clients or customers. For example, computer support specialists work closely with people who are frustrated with software or hardware they are struggling to use. Good listening and trouble-shooting skills are equally important.

Detail-oriented: Computer science professionals must be detail-oriented by nature. For example, software developers often concentrate their attention on various parts of an application or system at the same time, and must search for potential errors. Being detail-oriented helps with these tasks.

The above soft skills are important for advancement. Some of the skills cannot be learned in the classroom. They develop over time and with work experience. However, to advance to higher positions within a company, department, and industry, these skills should not be overlooked.

This concludes our article providing information about computer science degrees and careers.